When I was playing through Atelier Ryza 2: Lost Legends & the Secret Fairy, I could only think one thing. “What was that thing?” I hear you ask. Well, thanks for asking. Actually, two things. Originally, I had some technical difficulties with the game, so the review was put on hold. This led to me thinking about why my PC hated me.

Anyway. What was the relevant thing that I was thinking? When I was playing Atelier Ryza 2, I thought Koei Tecmo missed a great opportunity to market the game. They should have used that Pick’n’Mix song. You know the one, Black Magic. I stand by this so much that I even pinged a message to Koei Tecmo. Either way, Reisalin has certainly crafted a secret potion or two.

But enough about falling in love. I’ll be talking about Reisalin’s assets soon enough, much like I did in my preview. What about the game? 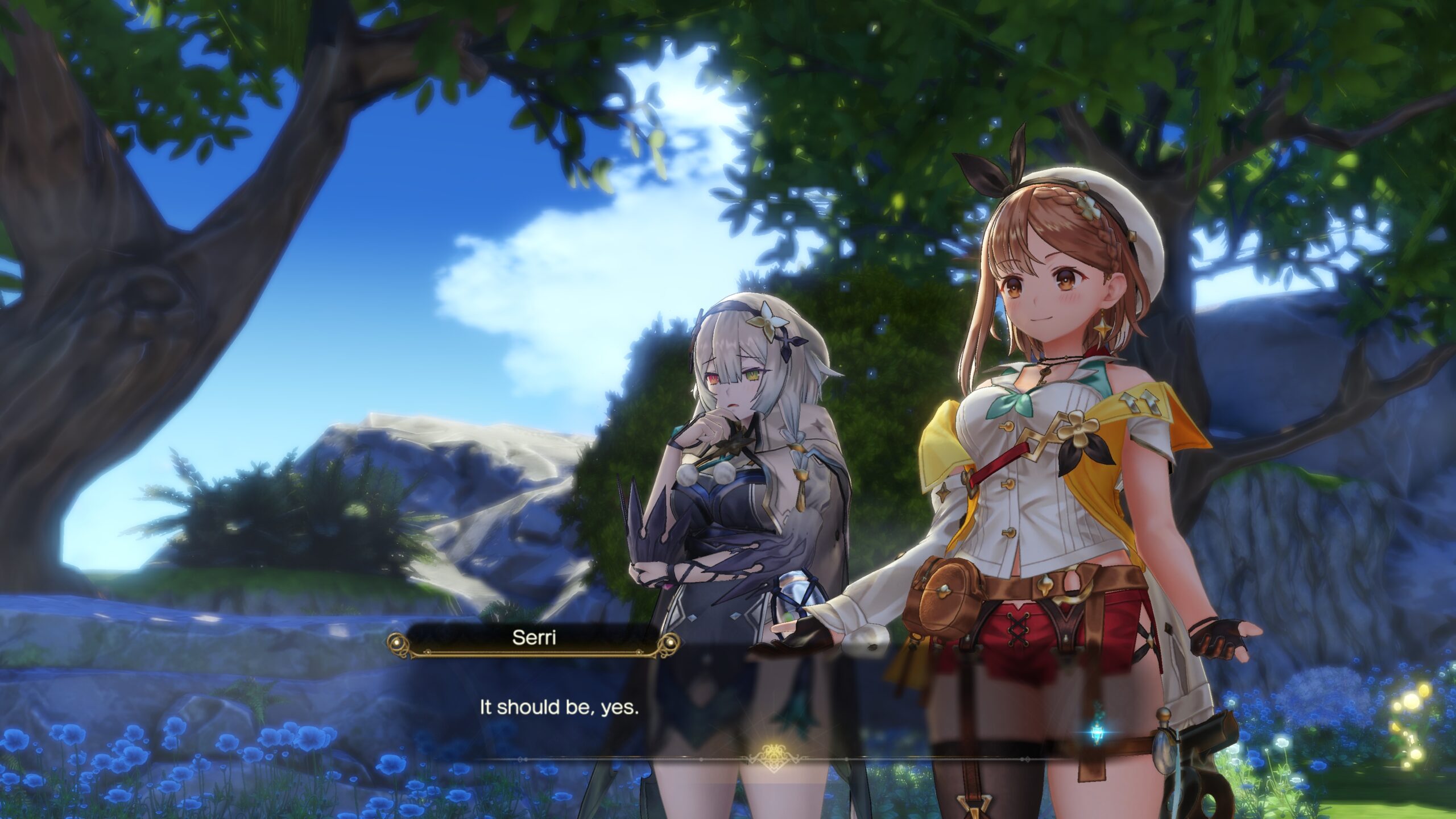 Well, Atelier Ryza 2: Temple of Doom is an Atelier game. You know the one. It’s a JRPG with added elements based around alchemy. In a rare turn of events though, this marks the first-ever direct sequel in a franchise that is now twenty-three years old. I should be exact, other titles (Atelier Iris, for example) have had sequels, but they haven’t featured the same playable protagonist and continuing their story. Reisalin Stout proved to be very popular in the first game, so a return of a more developed Reisalin just made sense.

I can’t say that Atelier Ryza 2: Judgement Day is something ultimately special in terms of story. You don’t need to know the events of the first game, but it helps. If you’ve played the first game, the returning cast will have more of an impact. The conversations about how much everybody has developed may gain a chuckle. The lack of conversation about how Reisalin has bloomed into a buxom supermodel wearing shorts a few sizes too small will perplex. Still, even if you don’t know them, you’ll find them endearing.

This mixture of characters, old and new, are charming and quirky. The exception to this is Fi, a character that can only be described as “annoying as F… ahem”. So Fi is a fairy and pretty much the driving point behind the whole game. No, really. Reisalin is asked to figure out what a particular item is, an item that’s been in that person’s family for generations and… they’ve only just decided to figure out what it is? It’s not the usual high-stakes story I’m used to in a JRPG. I’m used to saving a loved one, protecting my country, saving the world or, you know, going to school.

Nioh 2 1.23 Update Adds Double and Triple Boss Fights to the Depths of the Underworld, Tweaks Weapons and More

Atelier Ryza 2: The Wrath of Khan is pretty much a game about a young woman and her friends adventuring, picking up plants & rocks, and taking off parts of things you’ve killed. You go to the local ruins and figure out how the annoying flying rat (Fi) links to everything. You get to see glimpses of the past, pick up clues and essentially figure out what happened in a show of archaeology that manages to go further out there than Nicholas Cage. Honestly, as a story, it’s decent enough to pull things along, even if it can drag things out with cutscenes that make The Man From Earth look like it’s short on dialogue. 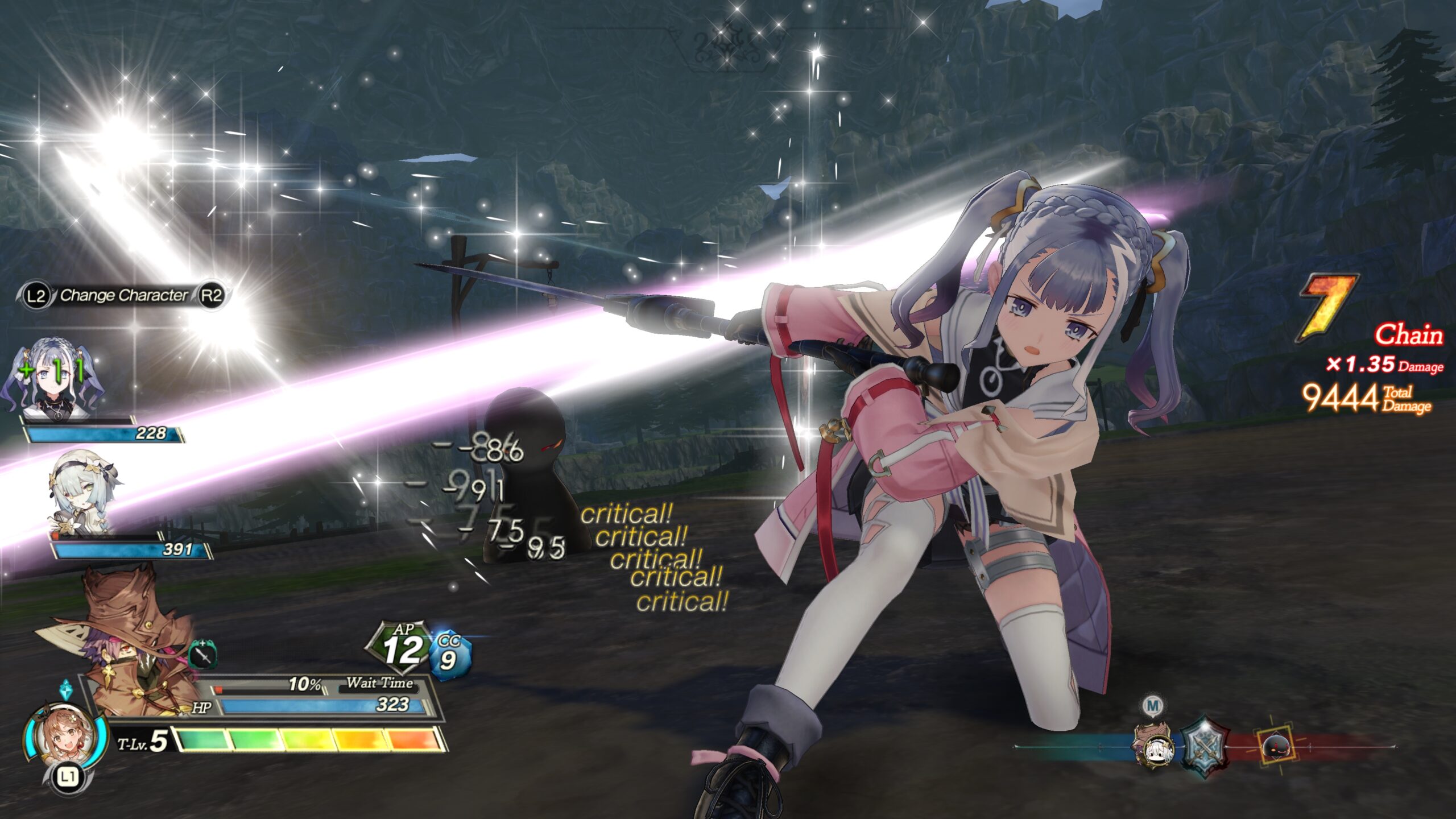 But yes, even though Atelier Ryza 2: The Two Towers doesn’t have the grandest of stories and can be a little too heavy on the dialogue, particularly stuff that feels like it’s padding the time out, it’s still endearing, and there’s a lot of character development that will suck you in. Beyond the story and characters, you have the gameplay. This is where the game shines. The first Ryza game already advanced several elements to take the game even further.

One of the advancements come in the form of combat. The combat system here is constantly engaging, although it can be a little in your face. While you’re in battle, everything is on the move. The ATB system will have you acting as each character’s turn comes up, as expected, with an additional AP system. Over time you’ll accumulate AP, which is used for special attacks. Enhancing the combat’s tactical feel, you can build up your AP and chain together particular attacks if you have enough stocked up.

There is a further emphasis on combat here too. Naturally, you’ll be using combat to level up your characters. You’ll also find yourself fighting to obtain more items to be used when crafting in the series’ long-running alchemy system. Now, on this system, I do think it’s a little complex. I’m not saying that you need to simplify the system though, maybe give me a manual. I’ve read The Lord of the Rings; I can read a manual of a similar size. This ends up being quite strange since there are a massive number of tutorials early-on.

The problem is that, as much as the alchemy system can be handy, it’s obtuse. You’ll be using a massive number of ingredients to add different effects to the items you’re creating. I’m not even sure how I’ve created some of the items I did, just sticking to throwing as many items in the cauldron as possible, hoping it works. Sometimes the items are very useful, other times I’ve just had them sitting there for the length of the game, likely missing out on something useful.

In addition to the usable items, you can also upgrade items and equipment and have the chance to create new equipment. Whatever you do in the alchemy, you’ll be gaining SP that allows you to unlock more items and equipment – though some can only be unlocked if you’ve got a certain part of the game. Some equipment you create, tied into the story and progression of the game, also allows for improved exploration of the maps. 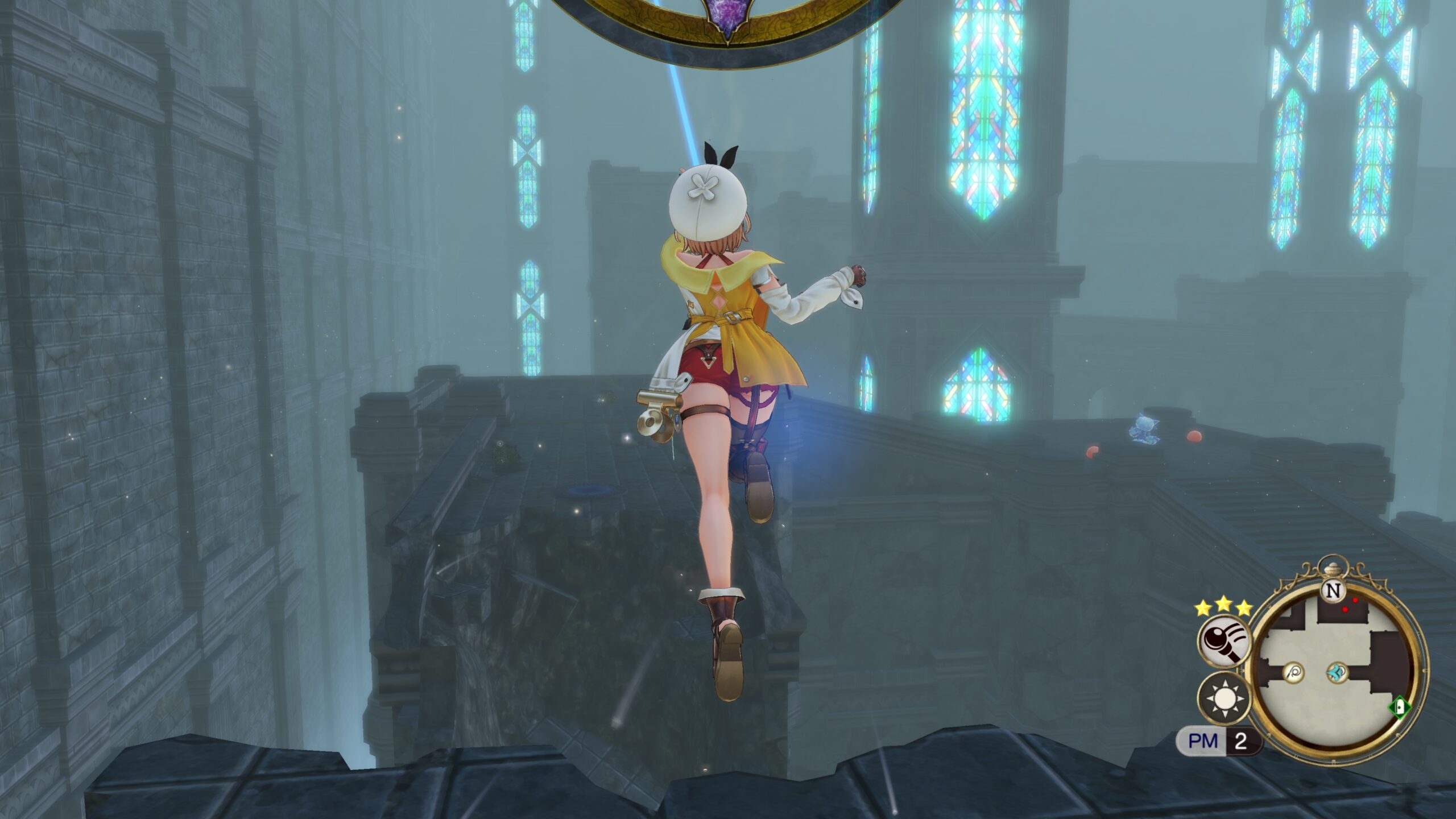 This exploration does enhance Atelier Ryza 2: Attack of the Clones a huge amount. Older titles could feel like so much was simply set dressing, whereas here you’ll find yourself swinging across gaps, diving underwater, digging for extra treasure, and more. The resource gathering items like pickaxes also return from the first game, letting you get even rarer items, cycling into creating improved equipment and items.

There is another aspect to the exploration within Atelier Ryza 2: Book of Secrets. This is something I’ve already mentioned, the archaeology. As you explore the ruins, you’ll be picking up different memories, and more. All of these will work into the Compass of Recollection mechanic, where you’ll be matching up clues to the relevant… stories(?), exploring more of the history of the ruins, and more.

It’s all enhanced by a game that genuinely looks great. It’s the same GUST art style you’ve seen in every other Atelier game, as well as Fairy Tail, but there seems to be a lot more detail here than normal. Characters, environments, it’s all improved. The characters are distinctive, though keep in line with their earlier appearances, just slightly aged. Most have a slight change in outfit, except Reisalin whose thighs are bursting out of the same shorts she was wearing three years ago. Either way, she’s looking at her best, which GUST are very quick to keep highlighting in some very over bits of fanservice. 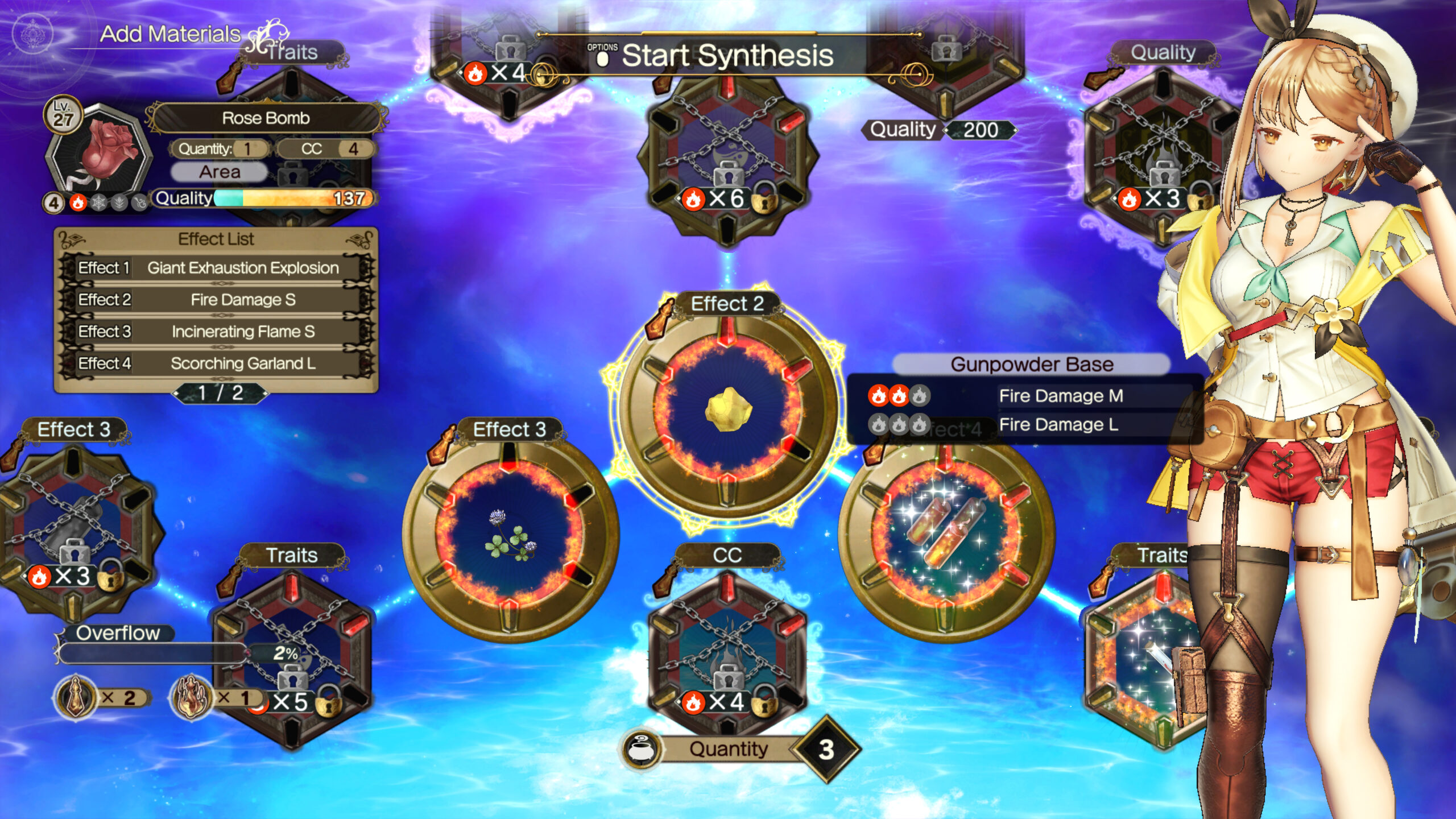 I haven’t spoken about a few elements of Atelier Ryza 2: Spirit of Vengeance, but they are mostly superfluous. One element that isn’t is the many side-quests, though I can’t say most of them are developed. You’ll find some that help with character development, but most are busywork that helps feed into the alchemy. Other aspects, well, you can change the outfits of characters – putting Reisalin in a swimsuit if you want – or add cosmetics to your penthouse apartment. It’s all cosmetic, though.

Whichever way you look at it, Atelier Ryza 2: Lost Legends & the Secret Fairy is a genuinely good, enjoyable, attractive, and engaging JPRG. I would argue this is the best work yet by GUST. It’s a shame that I ran into technical difficulties with the review build of the game. When I got to play the release-build, these had disappeared. As my summary, which you’ll see below this paragraph, points out – there’s a lot to like about the game. I can’t help but recommend it to anybody, fans or not of the series.

Atelier Ryza 2: Lost Legends & the Secret Fairy marks the very first direct sequel in Atelier’s twenty-three years old history. Bringing back Reisalin Stout makes perfect sense and the game benefits from Reisalin and her cheery cast of compatriots. With a light-hearted story taking you on an adventure in a genuinely great-looking and enjoyable to explore environments, you’ll also find yourself pulled in by an enhanced battle system, made even more tactical than before. The constantly returning alchemy is also joined by a system that I’m going to call memory archaeology, helping to develop the new main character as well as the history of the game’s world. Either way, this is a very enjoyable outing and one that will no doubt keep Reisalin as a fan-favourite character in what is arguably one of, if not the best game in the Atelier series.