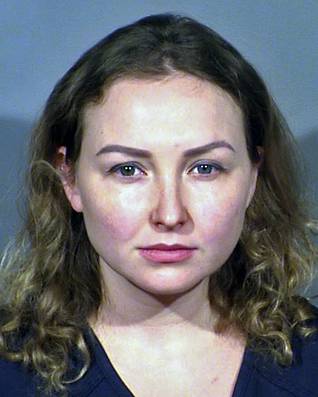 A couple arrested in Las Vegas last week are accused of posing as medical officials and administering cosmetic injections out of an apartment despite having no medical license, police say.

Metro received information from a woman on Aug. 2 who asked about unregistered nurses. The woman said she was following an Instagram account called Coco Labios, which advertised lip filler services. The woman agreed to pay for a service and was given an address for an Airbnb rental apartment in the 3500 block of Palos Verdes Street, near Twain Avenue and Paradise Road.

The woman said that on July 7, she met with a female named “Coco” and an unnamed male assistant, who was wearing medical scrubs at the apartment, and agreed to services that were performed that day and again on Aug. 2. The woman said that after the Aug. 2 appointment, she had an allergic reaction and a “cosmetic issue” stemming from the procedure, according to the arrest report.

The woman contacted the Nevada Nursing Board and was unable to find anyone named Coco Labios listed as a registered nurse. She said she could no longer contact Coco, as she was “constantly” changing locations, according to the arrest report.

On Sept. 27, Metro detectives were contacted by Nevada Attorney General Aaron Ford’s office regarding a possible unlicensed nurse conducting medical procedures. The procedures being conducted included injections for lip fillers and Botox, which the state says must be performed by a registered nurse at a licensed medical facility and can only be obtained by a prescription, according to the arrest report.

The Instagram account advertised that Coco Labios was established in 2017, licensed and certified, and is a “Russian lip” specialist, according to the report. Investigators searched the nationwide and Nevada nursing databases for the names of Coco Labios and Olga Girchenko, and no licensed nurses turned up.

Officers were eventually able to locate the couple’s operation to a new address in October, this time to an apartment in the 6400 block of Dinning Avenue, near Torrey Pines Drive and U.S. 95. Police surveyed the apartment on Oct. 13 and returned the next day to find a female being let inside and a man in scrubs picking up a package left by a postal worker, according to the report.

Police executed a search warrant later that day while the two were not at the apartment and found a medical bed, medical supplies, hypodermic needles, and business cards, according to the report. Officers were approached by two women who said they had booked appointments for Botox injections.

Police conducted a traffic stop on the vehicle the Girchenkos were seen leaving the apartment in, and saw in plain sight boxes of Sardenya, a lip filler, several boxes of hypodermic needles, a white coat with “Coco Labios” embroidered on it, and a trash bag containing used boxes of the filler, bloody gauzes and used needles and gloves. Police also searched a purse belonging to Olga, in which a hotel key to a local resort was found.

Olga Girchenko was interviewed by police and told them she only performs massages, according to the report. When told she was being interviewed because of an investigation into unlicensed medical procedures happening at the apartment she was seen leaving, she requested to speak with a lawyer.

When Kenny Girchenko was asked the same thing, he gave no response. When asked about his relationship with Olga, he did not respond.

Police also searched the hotel room that Olga had a key to and found a “large sum of U.S. currency” inside a safe and bank statements. Police seized the money, police said.

The two have since been released on bail and ordered not to perform any medical or cosmetic procedures, according to court records. Both were appointed public defenders and are due back in court in November.